10 Things You Didn’t Know About Einstein

By Tom WhartonMarch 4, 2016No Comments

When photographer Arthur Sasse attempted to persuade Einstein to smile for the camera on his 72nd birthday, the prominent genius playfully stuck out his tongue instead. This one snapshot personified Einstein in a way that nothing could – a revelatory intellectual that never took himself too seriously. The photograph revealed Einstein’s humanity and is – in some way – a reminder to us all that life is best lived when taken in stride.

There are things we know for certain about Einstein:  his genius, theory of relativity (e = mc 2) and unparalleled impact on science amongst them. But Albert Einstein was no lab rat in a white jacket fumbling with beakers – he was far more interesting. In fact, some may find little-known facts about the great physicist more compelling than his actual work. Above all else, these factoids pertaining to Einstein’s life reveal a deep-thinking, but very real, very human life.

HERE ARE 10 THINGS YOU DIDN’T KNOW ABOUT ALBERT EINSTEIN: 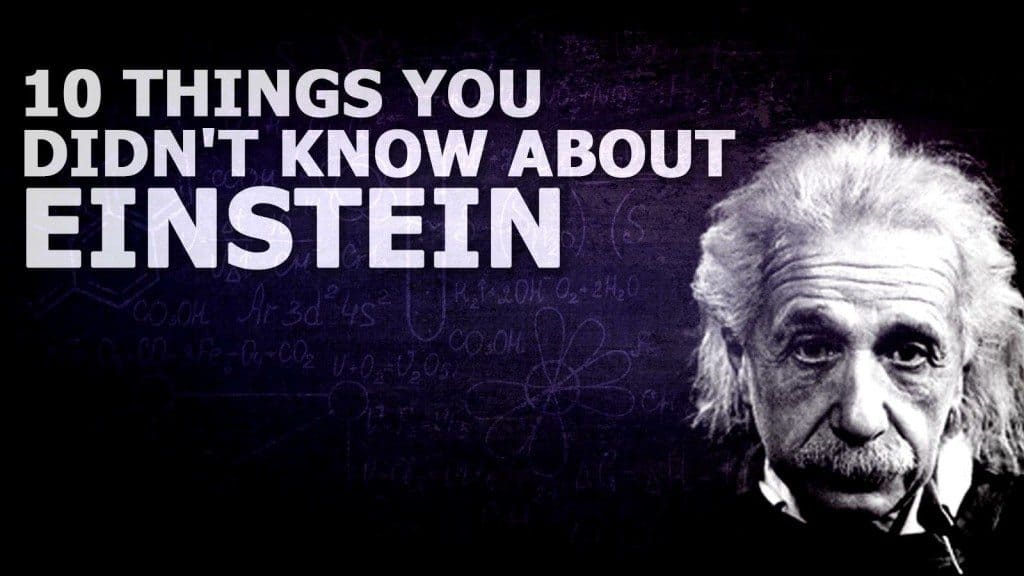 1. HE DIDN’T BEGIN SPEAKING UNTIL WELL INTO CHILDHOOD

Today, we infer much about a child’s intelligence relative to how early he or she begins to speak. Some correlation does exist between verbal acuity at a young age and intellect, but not in Einstein’s case.

Einstein didn’t actually begin speaking uninhibitedly until age 7, which is much later than normal. This fact, in conjunction with some of other Einstein’s traits – his single-minded focus on physics, implementation of routines and music talent – has led to the hypothesis that Einstein perhaps had Asperger’s syndrome. Some have vehemently argued against this theory, instead believing that Einstein was a non-autistic that displayed giftedness in other areas.

2. HIS BRAIN WAS STOLEN

Einstein was a genius that refused to be idolized, as evident in his instructions that his brain wasn’t to be studied. Instead, he wished for his body to be cremated and his ashes scattered.

A Princeton professor by the name of Thomas Harvey didn’t get the message. On April 18, 1955, Harvey took possession of Einstein’s brain without permission. For this treacherous and disrespectful act, Harvey was subsequently fired from Princeton University.

3. HE WAS OFFERED THE PRESIDENCY

Okay, not of the United States, but it’s still impressive. After the first President of Israel Chaim Weizmann died on November 9, 1952, Einstein was asked for he would accept the position. Of course, one can only imagine what Einstein’s initial reaction was, but he unsurprisingly declined.

In his refusal letter, Einstein’s humility was apparent, citing his lack of natural aptitude for the position and incompatible ways of dealing with people. Not to mention, he was getting old – he received the offer at 73.

4. HIS RELATIONSHIPS WERE ODD AND TUMULTUOUS

Perhaps nothing reveals Einstein’s quirky shortcomings more than his relationships. His written letters demonstrate that he was quite the philanderer. He engaged in several extramarital affairs and even had a relationship with his cousin Elsa. Although he eventually married her, Einstein also considered matrimony with Elsa’s daughter.

Sadly, Einstein also became involuntarily estranged from his own sons, one of whom suffered from schizophrenia. In an act of atonement, Einstein gave all of his Nobel Prize money in a divorce settlement.

5. HE LOVED TO SMOKE

There’s a reason many of Einstein’s pictures show a wily-haired man with a pipe dangling from his mouth – he enjoyed smoking. Not only did he enjoy smoking, he attributed the habit to assisting him in his work, once saying: “I believe that pipe smoking contributes to a somewhat calm and objective judgment in all human affairs.”

This attitude towards smoking was (unsurprisingly) rebutted by his doctor, who tried to get him to quit altogether. The doctor (again, unsurprisingly) was unsuccessful in his efforts.

6. HE LITERALLY CHANGED SCIENCE IN ONE YEAR

Apparently, there are Einstein’s New Year’s resolutions and everyone else’s. In 1905, he published a series of four papers that consequently turned the scientific community on their respective ear. These papers contained groundbreaking new insights that rebutted then-accepted views on energy, mass, time and space.

Despite this, Einstein faced constant rejection from academic posts after graduation. This becomes less mystifying when considering Einstein’s hilariously impulsive act: he requested a letter of recommendation from a professor whose classes he routinely skipped.

7. HE WAS HELD HOSTAGE ONLY TO MEDIATE IT

After a number of professors were taken hostage by a group of radical students at University of Berlin, Einstein and Max Born, another renowned scientist, were understandably reluctant to let the German police handle the situation.

While the details are rather unclear, it was known that the two scientists were well-respected among the students. This respect may have given Einstein and Born enough leverage to ultimately secure the staff’s release.

8. HE CO-DESIGNED A REFRIGERATOR

Together with Hungarian physicist Leo Szilard, Einstein patented a design for a refrigerator in 1930. At that time, electrical refrigerators were used that leaked volatile and unhealthy chemicals. Recognizing this, Einstein and Szilard designed an absorption refrigerator – one that required only ammonia, butane and water – as an alternative.

Szilard and Einstein’s patents were eventually purchased by the Swedish appliance company Electrolux.

Einstein did some of his best thinking when alone with his thoughts. He discovered his deep passion for sailing while a student at Polytechnic Institute in Zurich, Switzerland. This is rather unsurprising, as Einstein despised school, once saying partly: “It is, in fact, nothing short of a miracle that the modern methods of education have not yet entirely strangled the holy curiosity of inquiry…”

In later years, Einstein would grow weary of his stuffy office and venture out on the water despite not knowing how to swim.

10. HE WAS WANTED BY ADOLF HITLER

Adolf Hitler’s Nazi regime was embarrassed by Einstein’s popularity in the United States. This embarrassment was amplified through Einstein’s momentous impact on the scientific community. Nazis were attempting to propagandize the inferiority of Jews, and Einstein’s work was a clear rebuttal of that concept.

Hitler was infuriated, placing a $5,000 bounty on Einstein and ordering that all of his books in Germany burned. The ignorant, fanatical tyrant also ordered the burning of many other prominent Jew’s works.